On September 22nd, TAP-Chicago’s very own dragon boat team, TAP-Chicago Thunder, will participate in its final race of the season. It has been a wonderful season, and we’ve medaled at every single race!

Below is a World Journal article written right after our second race, which took place in Chinatown. Look at us with our proud smiles, red uniforms, and medals. Want us to keep those smiles? Come cheer for us in UW Oshkosh at the end of September, or even better, join us for this final race. Your support will give us the strength to win another medal. Go, TAP Thunder! 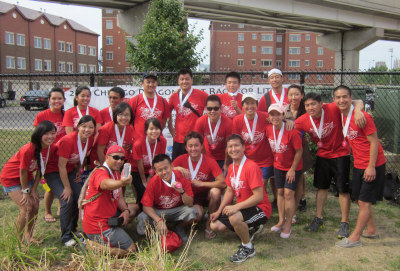 President Hauwei Lien explained that the organization, founded four years ago, now has around 700 members between the ages 20 to 40, from all trades and professions. The organization hosts a variety of events, including volunteer tutoring sessions for children, dog-walking events for canine rescue organizations, networking events, cultural events such as Taiwanese movie screenings, and sporting events such as volleyball. They also host events during such holidays as the Chinese New Year, Mid-Autumn Festival, and Dragon Boat Festival.

An estimated 60 teams will participate in the Chicago International Dragon Boat Festival in Arlington Heights. Hauwei Lien welcomes everyone to come out and cheer for their team this weekend; the organization also encourages interested individuals to join the team. More information about the event can be found at http://tapchicago.org

TAP-Chicago Movie Night: You Are the Apple of My Eye (那些年，我們一起追的女孩)

You Are the Apple of My Eye is a Taiwanese romantic comedy based in central Taiwan. It is the story between a mischievous student, Ko Ching-teng, and an honor-roll student, Shen Chia-yi, who is very popular amongst the boys in her class. This 2011 movie was released in Taiwan and set box-office records in Taiwan, Hong Kong, and Singapore. At the 48th Golden Horse Awards, Michelle Chen was nominated for Best Actress, Ko Chen-tung for Best New Actor, Giddens Ko as Best New Director, and 「Those Years」 as Best Original Film Song. The movie will be in Mandarin but there will be English subtitles.

The movie will start at 4pm but come a little early and enjoy appetizers and drink specials, courtesy of the Pump Room.

For the folks who register early, there will also be dinner afterward at the hottest restaurant in Chinatown, MingHin Cuisine. Dinner will be hosted in their elaborately decorated private room, with a set course diligently prepared by their chefs.

Admission
Movie only: $5 in advance by Thursday night on August 16th. $8 afterward.